When food costs are uncontrollable, here are 8 ways to lower costs

When we talk about boosting profits for restaurants, we often recommend controlling or lowering variable costs like food or labor. That’s because for the most part, those recommendations work. That is, they worked until the restaurant industry (and the rest of the world) was sidelined not only by the initial shutdowns of COVID-19, but also the operating roller coaster that has been left in its wake.

Before the pandemic, Ford’s Fish Shack had been open for just over 10 years, so it’s no surprise that owner Tony Stafford had a well-oiled machine, operating their three locations. And then March 2020 happened. Tony noted that initially food costs weren’t their biggest problem, because there was a surplus of seafood for restaurateurs thanks to the initial shut downs lowering demand. 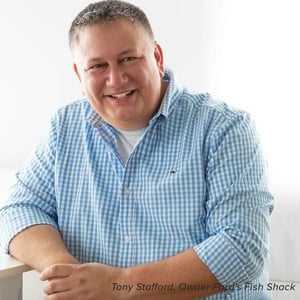 While being offered products at extremely low prices is every restaurateur's dream, this meant Tony had bigger fish to fry (or freeze in this case) as business had slowed and they could only do take-out or delivery. Since then, they’ve had to get creative while trying to ride out the pandemic waves.

He explains, “Up until 6 months ago, we felt like we were figuring all of this out and trying to get back to some sense of normalcy, and then obviously inflation hit.”

As a long-time restaurateur, we sat down with Tony to pick his brain on some more non-traditional ways restaurants can improve profit margins with unpredictable product prices and the constant changes of our post-COVID world.

Knowing Where to Make the Right Cuts

Managing food costs is even more difficult than before, thanks to inflation and events impacting the global market, like the recent Russian invasion of Ukraine. The increase in gas prices as a result of the invasion have been especially felt by the seafood industry, as product freshness requires immediate transport from purveyor to consumer.

What may seem like the most obvious tactic for combatting this increase in operating costs is also many restaurateurs’ least favorite: raising menu prices.

That 6.8% is still a big increase for menu prices, showing that operators are making the necessary adjustments, but to stay competitive there is a limit to how high they can go.

Tony explains, “I think the line of value perception for dining out is going to get very, very blurred very soon. They’re going to be considering whether they should just eat at home and save some money, rather than if it's worth it to eat out. I think that all restaurants are close to hitting that line right now, so we really have to be careful, and one of the ways we try to do that is looking at other ways to save money- not just through the cost of food.”

So where can restaurateurs make cuts? Before doing anything, Tony recommends making sure guest comfort, safety and security comes first.

“You want to make sure the guest is comfortable when they come to your restaurant. Sanitation and cleanliness is still super important, so you don’t want to stop using the proper cleaning protocols.”

After that, he recommends thinking outside the box and considering small but impactful changes to fixed costs. Here’s a (non-exhaustive) list of 8 ways to do just that.

8 ways for restaurants to lower costs

1. Our dads were onto something

Electricity costs can really add up depending on the size of your restaurant. Compared to other commercial buildings, restaurants on average use  five to seven times more energy per square foot. One study found that reducing energy costs by 20% resulted in a 1% increase in profit.

Turns out our dads were onto something with their relentless chiding to “stop leaving all the damn lights on.” Restaurants too, like our parents’ houses, are not made of money.

With operators already having a million (roughly) things to take care of, Tony recommends automatic options for energy saving like motion activated lights in bathrooms, or putting outdoor signs on a timer so they don’t stay on all night.

Advertising your restaurant with a big neon sign at 3:00AM on a Wednesday morning probably won't give you the return on the electricity cost investment we’re all hoping for.

2. Fill up those dumpsters

Optimize your trash pick up. The National Restaurant Association’s Conserve Program reports that across their portfolio, restaurants pay on average $430 a month for waste management. Reducing the number of pickups you schedule in a week can make a big impact, especially when each pick up costs around $150 a pop- and we’re not even talking about recycling yet. Don’t pay for half empty dumpsters if you don't have to.

The even better news is that implementing strategies to reduce food costs through managing food usage (which we have a quick hack for) means you’ll end up with less waste for your dumpsters. That’s what we in the biz call a real two-fer.

3. Maintenance is your friend

Tony recommends making sure all your fixtures and appliances are in tip top shape, as leaving that faucet leaking for weeks on end is, quite literally, money down the drain.

Regular maintenance also helps prevent major issues from happening, that more often than not, will require expensive emergency fixes. Take the time to check for leaks or other issues regularly and save yourself (and your wallet) the headache.

Tony was also able to lower costs by switching from cable to YouTube TV for his dining room televisions. The service streams 80+ major channels, and you can use the service on up to three devices, or monitors, at once.

QR code menus became a staple for many restaurants during the pandemic as a way to provide more touchless options for diners. Turns out, they’re cheaper than paper or laminated menus too.

Tony explains, “What we’re using QR for the most right now is our menu. And I’m not the biggest fan of QR menus. I think people order and eat differently because they’re on their phones and they can’t see the whole menu at one time. But I have 18 or 19 items on my menus that I would literally have to change daily if I didn’t have QR menus.

For a set of menus: brunch, lunch and dinner, for all of my restaurants, it's about $900. If I had to do that every week that adds up quickly. QR has been great for us because if we need to change a price, we can change it daily- literally by the shift.”

QR codes aren’t just great for menus, they also are a faster and safer payment option for diners.

“We’re getting ready to implement a new credit card processor that’s going to do pay at the table. That way, for guest security, the credit card never leaves the guest’s possession.”

This technology becomes even more invaluable when you factor in staffing shortages and how much time your servers would save for each table if they didn’t have to manually swipe each guests’ card, especially for those “split the bill 6 ways” brunches.

Tony notes, “It’ll save money, big time. Now instead of servers having three or four tables at a time, they can have five or six because of the amount of time it saves. It will definitely make them more efficient.”

Many restaurants have been thinking about ditching ye olde phone line. While most (ok, probably all) things are going digital, Tony warns against completely getting rid of the older technologies and looking for ways to make them more efficient instead.

He notes, “People still call into restaurants, so you need to keep those up to date.” Tony admits that ditching the landline was a major cost saver, especially when it comes to being a multi-unit operator.

He explains, “We’re going to an IP-based phone system because they are much more efficient and much cheaper to operate. We have a general 1-800 number, and then through that number the calls can be transferred to our different locations. So if you call my restaurant and can’t get a reservation at my location, I can transfer the call directly to another location. Before, if someone called my location by mistake and the host gave them the right location’s number, there’s a chance that person might not call the second store. This way you don’t lose that guest.”

For any restaurants with growth on the horizon, Tony recommends building new concepts with cleaning and accessibility in mind.

He points out, “If you look at how restaurants are being built out now, they’re getting away from the wood and decorative finishes and are putting in more stone, concrete and steel because they’re a lot easier to clean. Keeping a restaurant looking fresh and new is expensive.”

He continues, “Going into a restaurant with a big high ceiling is great, but you have to think about how they clean all that dust out. You’re already seeing national restaurants built with not only new technology like kiosks in mind to be more efficient, but also building them to be easier to clean.”

While we all appreciate the postmodern panacea design of a Cheesecake factory, someone has to climb up and dust those Egyptian-style columns (we hope). Planning out a new restaurant design with accessibility and cleaning in mind is like having built-in savings.

Tony also believes that building in areas specifically optimized for to-go ordering is another aspect new builds can’t afford to forget. “Before COVID, a lot of full service restaurants never thought they had the ability to sell food to-go at a large scale. Now we’re looking at putting a little to-go seafood market in our restaurants to capture additional sales.”

No matter where you decide to implement cost saving initiatives, Tony reassures us that it is all about balance.

“We’re told that food costs are supposed to be a third of your overall sales, but that’s just a number someone taught us. There’s a balance. Even as salaries for restaurant positions and food costs go up, we can’t charge $30 for a hamburger. Even though food costs have gone up and changed the profit proportion for my menu items, I can look at other ways to lower my fixed expenses and find that balance to stay profitable.”

How to Reduce Restaurant Food Costs in 2022

6 Ways to Chop Your Food Costs

5 Ways to Control Food Costs in Your Restaurant